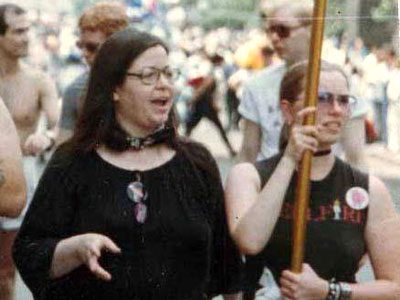 Say the name Brenda Howard to most members of the LGBT+ community and you are likely to be met with a blank look.

But bisexual Howard, who was married to a man, sowed the seed for the most important event in the LGBT+ calendar – Pride. Despite this, and her outspoken bi activism, she isn’t exactly a household name. Indeed, Howard is sometimes even erroneously referred to as straight in documentaries and articles, despite her prolific bi activism and the fact she was responsible for setting up the New York Area Bisexual Network and the first ever bisexual Alcoholics Anonymous chapter.

Pride grew out of the Christopher Street Liberation Day march, which Howard was responsible for organizing on the first anniversary of the Stonewall riots in June 1970. She also came up with the idea of organizing workshops, talks and other events around the march, giving birth to the concept of not only a Pride march but also a Pride festival. As well as being a bi activist, Howard also worked to increase visibility and understanding of the BDSM and polyamory communities, making her even more groundbreaking for her time. “Bi, poly, switch,” Howard once said during a speech. “I’m not greedy, I know what I want.”

Howard’s relative absence from the history books is a prime example of why we need things like the annual Bi Visibility Day, which fell yesterday (September 23).

Bisexuals are too often erased by the LG(B)T community, accused of having the benefit of “straight privilege” and not being “fully gay” enough to qualify for marginalized status. In reality, nothing could be further from the truth. Bisexuals are too often rejected in both straight and gay society, existing in a hinterland between the two. We’re too gay to be straight and too straight to be gay. Some people even question our existence full-stop.

That said, there have been significant moves to push Howard, who died in 2005, into the spotlight.

PFLAG (Parents and Friends of Lesbians and Gays) launched its Brenda Howard Award, honoring bi advocates, in the year she passed away. Winners include her husband, Larry Nelson, and Denarii Grace, who was awarded the prize for her intersectional work with bi+ identity, disability, Blackness, and fat acceptance. An apt choice, given that intersectionality was at the heart of everything Howard stood for.

Howard was arrested several times for her activism. Once she was arrested for protesting against the firing of an out lesbian in the Georgia state attorney general’s office, and another time she was arrested for protesting for free national healthcare. As Nelson said in Remembering Brenda: An Ode To The “Mother Of Pride”: “You needed some kind of help organizing some type of protest or something in social justice? All you had to do was call her and she’ll just say when and where.”

Howard passed away on June 28 2005 – the 36th anniversary of the Stonewall Riots. A summer of Prides is just about petering out, but her legacy remains. So next time you feel tempted to shout “Breeders” at the bi contingent on a Pride march, remember who it all came from. Without this brave bisexual pioneer, you wouldn’t even be there.