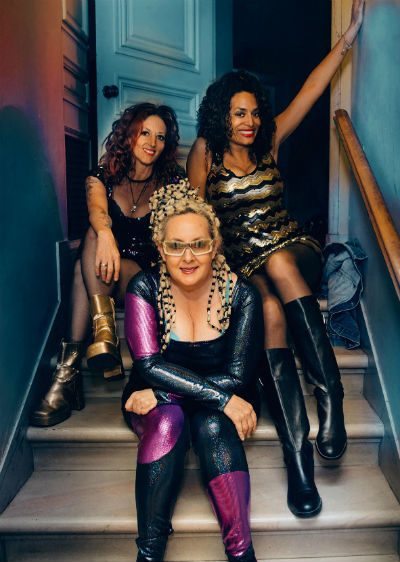 A shared passion for social justice and a love of music has kept BETTY rocking for 30 years.

BETTY is a love bomb that keeps finding more exciting ways to detonate.

Band members Alyson Palmer and Elizabeth and Amy Ziff create music that inspires. Take their new song, “Sticky Rice.” The dance beat, the positive lyrics, and an uplifting sound transform the song’s subject—sticky rice and mango—into an expression of self-love.

Their live shows do very much the same: You go for the music, you leave feeling refreshed and connected. This is not an accident. Individually and collectively, the three women are activists who seek to make the world a safer and more equitable place.

Most lesbians know BETTY from the L Word theme song, which they composed and performed. That tune, and their involvement in the show, gave the band—as Alyson Palmer says—“a lot of great visibility.” No doubt, that experience launched BETTY’s popularity with the lesbian crowd. “Before that, we had a very large gay male audience, from the work we did in the AIDS crisis, and then all of a sudden the lezzies got it,” says Elizabeth Ziff. As Amy Ziff remembers, “Afterward, when we played in Europe … people were singing our songs.” Even today, when the band plays the L Word theme, “everyone loves it and sings along,” says Elizabeth.

BETTY is more than “girls in tight dresses” who rock great tunes. The band has a long personal history—30 years and counting—and a commitment to social justice that makes them a part of lesbian history—past, present, and future. While we all sat and had lunch recently, I got to learn how they do it.

The LGBT community—and the world—has seen a lot of history since BETTY first got together. Think about it. BETTY has been dosing out a hopeful message through the fight against apartheid; the AIDS epidemic; the fall of the Berlin Wall; Ellen DeGeneres’ coming out on national TV; Don’t Ask, Don’t Tell (and its repeal); 9/11, and the marriage equality movement. Sadly, women’s rights haven’t come as far as the women of BETTY had hoped. “Misogyny is the great equalizer,” says Amy. “No matter what culture you come from, no matter what country you live in, when you are a misogynist, you are empowered, you are vocal, you are supported. And that has never changed.”

Social inequity galvanizes the band and drives them to expand their work beyond the stage. Through The BETTY Effect (thebettyeffect.org), the group’s advocacy arm, the band works with local NGOs around the world and occasionally with the State Department to teach people to use their voices and to self-advocate through “playshops” (BETTY-speak for workshops) and performance. For each of the band members, this is part of their mission. “We are reaching people who are trying to effect change,” says Alyson. “It’s so rewarding to be performing on another level. I can see doing this until the end of my life.”

This zeal for activist work has helped them stay together for 30 years, which is an accomplishment for any relationship, especially one that involves making music. “Without any shared passions, I don’t know how any relationship exists longer than 23 days,” says Alyson.

They won’t lie—staying together hasn’t always been easy. There have been moments of tension when they thought they would break up. “I think of it as a Venn diagram between the three of us,” explains Alyson. “It’s three congruent circles that when they overlap together it’s brilliant and amazing and phenomenal. Every once in a while, one circle will peel out. The worst times are when all three circles peel out, but most times we are at least touching. And when things are going really well, we are overlapping.”

Other factors that have helped them they stay together include “perseverance and like-mindedness,” says Elizabeth.  And then there’s the music itself. “When we create together, it works things out,” she reflects. A sense of humor cannot be underestimated. “Golden handcuffs,” says Amy, bond the three. This provokes laughter, and they then turn their attention to discussing the best way to combine the selection of breads and spreads on the table. Elizabeth looks up. “That’s one other thing that BETTY does really well together—eat!” Alyson adds playfully, “When there is no other communication, there’s always the communication of calories.”

The members of BETTY share a fellowship with women in other bands that have been around for a long time, like the B-52s and the Indigo Girls. “There’s a shared vocabulary about what triggers fights and what issues there are,” Amy says. But there is also something organic about BETTY’s longevity. During the time I spent with them, I was amazed at how their dynamic was much the same onstage and off: They overlap, they joke, they challenge one another. When we spoke about their projects and talents outside the band, each of them was the others’ best advocate. The trick seems to be the three-part harmony that naturally exists between them.

Others have noticed it too. When the band reached the 18-year mark, director Michael Greif (Rent, Next to Normal) saw them perform and encouraged them to create a show about what it’s like to be in essentially a polygamous relationship. What resulted was BETTY Rules, an off-Broadway and touring show.

Elizabeth, Amy, and Alyson have been there for each other in sickness and in health, through marriage and personal tragedy. BETTY performed at Alyson’s mother’s and father’s funerals. Amy and Elizabeth are “goddess mothers” to the two children Alyson is raising with Tony Salvatore, their lead guitarist and Alyson’s partner of 30 years. “I’ve never wanted children, but it’s fun to be a peripheral parent,” says Elizabeth. But by far their biggest challenge has been Elizabeth’s fight with breast cancer, which was first diagnosed in 2007. Her three-year battle, including chemotherapy and a mastectomy, was “long and brutal,” she says. “I’m fine now, clear and healthy. But I couldn’t have done it without insurance, my cousin Pond Kelemen at the Ashikari Breast Center, and the huge family of women who stood by me. And Amy and Alyson were the rocks underneath me.”

Amy was recently married to Kristi Ambrosetti, and the band put its stamp on the celebration, which was officiated by Gloria Steinem. “Alyson made a whole show for us, Elizabeth did the music. It was something that people will talk about for the rest of their lives,” says Amy.

The wedding was another turning point for them. Alyson remembers, “My favorite BETTY picture ever is Elizabeth and me walking Amy down the aisle. Instinctively, we held hands and were like, ‘Here’s the next adventure.’ ”

Anyone who follows the band knows that the world’s greatest living feminist, Gloria Steinem, is a fan. So much so that she even appears at their gigs, either in the audience or onstage as a special guest. For those curious about how Steinem came into BETTY’s orbit, the connection came through BETTY’s lawyer for the past 28 years, Nancy Rose, who is friends with Susan Levine, a founder of Ms. magazine. “We had a gig at the Bottom Line [a club in New York that no longer exists]. Susan brought Gloria to the show—this was like 27 years ago. She came running backstage after the show, and we met and all fell in love. Many protests and pro-choice and women’s events later, we are still wonderful deep feminist friends. We all love to laugh and have so much respect for each other. We love Gloria and know we would not be who we are if she hadn’t existed. The one thing the three of us agree on is how truly amazing, smart, and important Gloria Steinem is.”

Last December, Steinem took to the stage at City Winery in New York City during BETTY’s holiday show and shared her Top Ten Things I Want for Christmas, as an endorsement of The BETTY Effect. Number two on Steinem’s list was “I want the three magical women of BETTY to have everything they need to spread The BETTY Effect around the world. They are such a gift. They organize with music and by their own irresistible examples.”

No matter what BETTY does in this next chapter, rest assured it will be inspiring, empowering, and damned entertaining. BETTY Rules was the name of their first stage show. If they do a second, a fitting title would be BETTY Reigns.