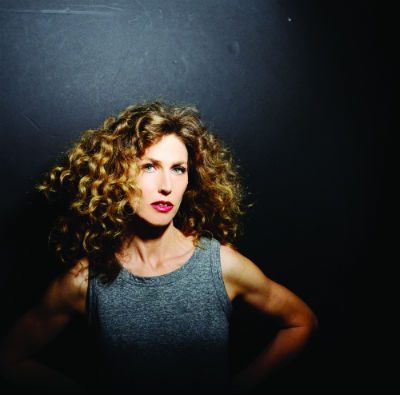 Sophie B. Hawkins is, of course, best known for her music— specifically the memorable pop hits “Damn I Wish I Was Your Lover,” “Right Beside You,” and of course “As I Lay Me Down.”

But the dynamic blonde has also been an actor, a playwright, a painter, a political activist, and—most importantly to her—a mom. After laying low for the last few years and focusing mainly on that last role, Hawkins is back in a big way in 2017.

In late autumn, she  released Free Myself, her first album in nearly five years and only her second studio effort since 2004. Her longtime fans will not be disappointed. Much like her earlier work, Free Myself contains an abundance of songs about relationships, with Hawkins’s signature heartfelt vocals and glossy production values. When I ask her if the new album was inspired by a relationship, she says yes—up to a point.

“I escaped from L.A. and moved back to New York in 2014,” Hawkins tells me. “And I escaped from a relationship that was long-term and all encompassing. So some of the songs are about independence—finding myself and rebuilding myself again, without a partner, without a manager, without a house. Really starting from scratch…But other songs, like ‘Consume Me with Your Fire’ and ‘Hunger for Love,’ come from a yearning. [They’re] not [about] a specific person.”

There is also a new version of the Billboard Hot 100 hit from the album Whaler, “As I Lay Me Down” on Free Myself. “I remember the exact night [I wrote it],” says Hawkins when I ask her about the song. “I was working at Souen, which is a macrobiotic restaurant [in Manhattan]. I came home, and I was roommates with another artist [who] was mad that I was staying up so late. So I remember going into the bathroom to finish [it]. I sat in there, and I was looking out on the courtyard, and it was probably two in the morning or something, and things just started flowing…I remember my fingers just finding the verses and moving with it, and then the bridge coming…You know, I think people have said this before [but] it was as if [the song] was there for me to get out.”

The album isn’t the only thing that’s been taking up Hawkins’s time lately; she’s also working on a play. “Right now, it’s in between a play and a musical,” she explains. “So I call it a play-sical. I’m working with a very good director, and I have to get the book to a certain level. And then, I’ve written 12 original songs for it…I have new songs [for] a play, and then I have new songs [for] an album. And I just want to make sure that they’re released in the right places.”

In all likelihood, Hawkins will include a couple of the songs from Free Myself in the play and keep the rest on the album only— but the details were still being worked out when we spoke.

As if a new album and a musical weren’t enough, Hawkins also has a new baby. Esther is the singer’s second child and her first daughter. Ever unpredictable, she gave birth to Esther less than two years ago, at the age of 51. When I ask her how it feels to be a mother again at that age (and a single one, no less), she replies, “It’s great. [My son] Dashiell and Esther are basically twins, separated by six years. I froze my embryos when I was 31. It was unusual to do that at the time, but I really knew that I wanted to be a mother—and I was not in a position to be, then. That’s how I am—I save socks, I save money, I save embryos,” she laughs.

“When I got to be 43, I decided to have [my first] child…and it was the best thing I’ve ever done. I know every mother says this, and it’s a cliché, but meeting somebody for the first time, somebody who doesn’t have a history on this earth, when they come out [of you], it’s mind blowing!

“When I decided to have Esther [in 2015], that was a much harder decision,” adds Hawkins. “Not because of my age, but because I had just gone through this breakup in California, and I was starting all over again. Basically, my friends in New York said, ‘It would be really good for Dashiell to have a sibling.’ And they also said, ‘Look how much you love being a mother.’ So I was convinced that for Dashiell’s sake, because I’m a single mother, that he should have somebody. Hopefully, they’ll be the kind of siblings who stay connected.”

The long-term relationship that Hawkins got out of in 2014—the one that inspired Free Myself—was indeed with a woman. But Hawkins defines her orientation—and her art—on no one’s terms but her own.

“In 1992, I was talking to [New York Times music critic] Jon Pareles,” she remembers. “He [asked if I was] gay and I said, ‘Jon, I’m omnisexual.’ I didn’t tell him I made up the word on the spot! ‘Omnisexual’ means that my sexual identity is not defined by your sexuality—[that is,] by my partner’s sexual identity. It’s basically spiritual. If I never had sex again, I’d still be a very sexual person and a very sensual person. But your being straight doesn’t make me gay or straight.

“When I was 9, I was in love with this kid named Paul,” she continues. “I would have died for him! Then, when I met his mother, I would have died for her, too. And I thought, ‘Oh my God, this is great. I can have everything!’ I was literally 9 years old then…So ‘omnisexual’ is my word. I coined it. And guess what? People are now using that word!”

If identifying as omnisexual, and becoming a mom again at 51, and claiming that just as her biggest hit was waiting to be written her child’s soul spoke to her make Hawkins sound a little flaky, they shouldn’t. Talking with her, what stood out most to me was how open she is, how spiritual, and how sincere. It’s good to have her making music again. Especially in New York. Especially now. Welcome home, Sophie. It’s great to have you back.